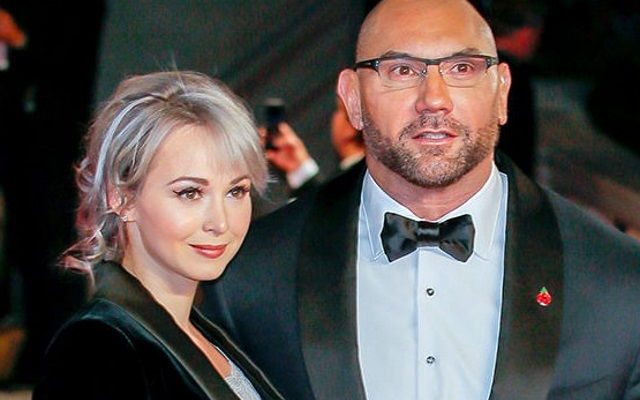 David Bautista is more popularly known as Batista to his millions of fans during his stint in the WWE. He was the world champion six times, the heavyweight champion four times, the WWE World Champion two times, and the world tag team champion three times. After his reign in the WWE, he moved on to Classic Entertainment and Sports and found himself in mixed martial arts fights. He also established an acting career and is well-known for his role as Drax in Guardians of the Galaxy. His next project is “Avengers Infinity Wars.”

Bautista was married to Glenda Bautista from 1990 to 1998. They have two daughters together, Athena and Keilani. In 1998, Bautista and Glenda divorced, and Bautista went on to marry Angie. They were together from 1998 to 2006. Angie is now in remission from ovarian cancer.

They say that the third time’s the charm. In 2015, he married Sarah Jade, his third marriage. On their wedding day, Sarah Jade looked every bit a princess with her ivory and Greek-inspired wedding gown. She wore a sparkling headpiece. Her husband, who waited patiently by the altar looked dashing in his black tux and could not take his eyes off his bride. The ceremony was attended by family and Bautista’s friends from the wrestling industry. They were full of praises for Sarah Jade.

Bautista is 20 years Sarah’s senior but the age gap never bothered the couple when they started dating until they got married.

Sarah Jade was born in Florida in December 1987. She has a degree in sociology from the University of South Florida. She is quite petite, compared to her husband. She is only 5’3” with an athletic build.

Sarah Jade got into pole-dancing when she was only 18 years old. Her biggest influences are YouTubers Karol Hems and Alethea Austin. Sarah Jade is a pole dancer who competes nationally. She placed second at the USPDF Amateur Nationals in 2012. She also won Ms Athletic at the Florida Pole Fitness Championship (Pro Division) in 2012 and 2013.
She was named Miss Pole Dance America in 2016.

She has turned her passion into a fulltime career. Her own studio called Buttercup Pole Dance America in Tampa, Florida is where she conducts her own pole-dancing classes and workshops. She also travels across the country to promote pole dancing. She hosts her blogspot and website to promote pole-dancing and her various workshop schedules.